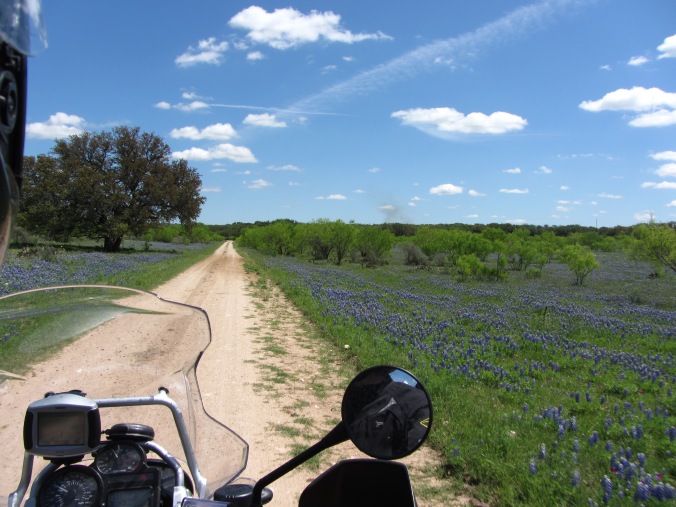 Wednesday was our last day in the Hill Country.

We couldn’t ride the whole day since we were meeting a friend that evening, so we had to make the most of it.

We left Junction for the last time with sunny, clear skies. After a quick Micky-D’s breakfast were off on 2169 again.

We decided to do the ride to Enchanted Rock then head to Cooper’s in Llano for lunch before moving on to Horseshoe Bay where we were staying for the night.

Some of these roads we had taken the day before, but going in the other direction. And with the  change in cloud cover it made for a different view of the scenery. 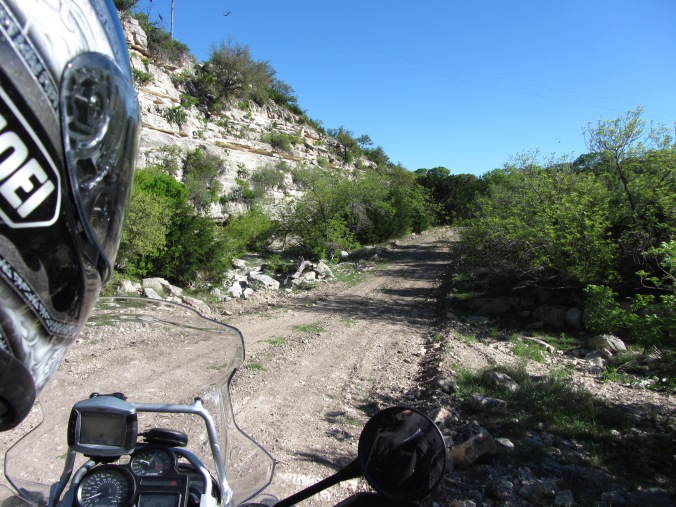 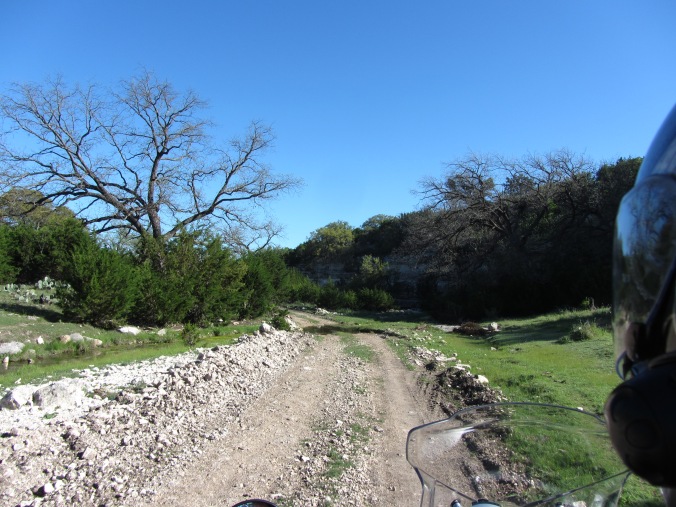 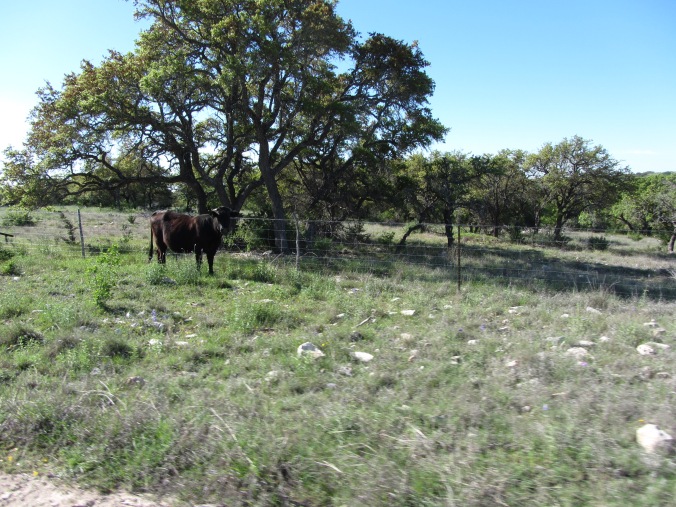 And yes, the cow is on THIS side of the fence. Her and all of her cow friends.

Then it was back on pavement to RR 385 southeast. 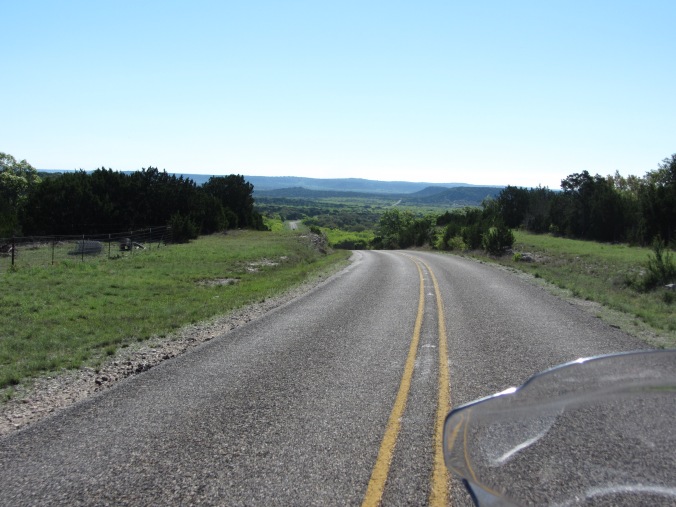 And then it was our first time getting lost for the day.

We rode all the way until 385 dead ends into Hwy 290 then turned around and headed back.

After blowing up the map on the trusty (Ha!) GPS we found the road we needed to take after Mill Creek Rd and that lead us to find our way in the right direction. It turns out it was actually CR 430 according to the GPS.

From CR 430 or Mill Creek Rd, we took East Mill Rd and that brought us to our first water crossing of the day, Little Devils River. 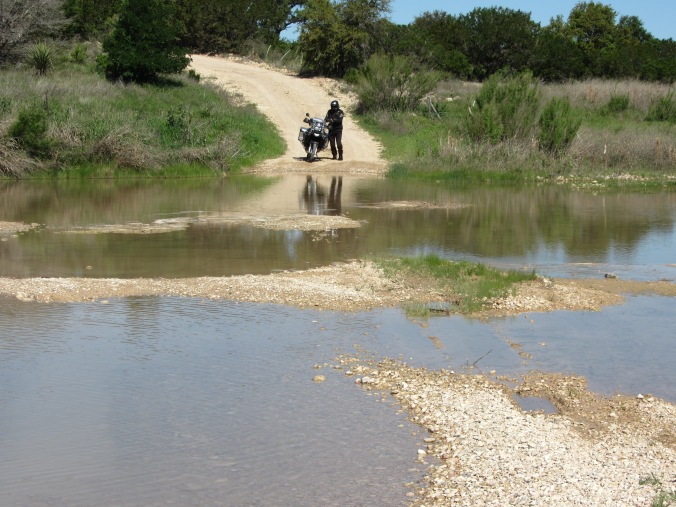 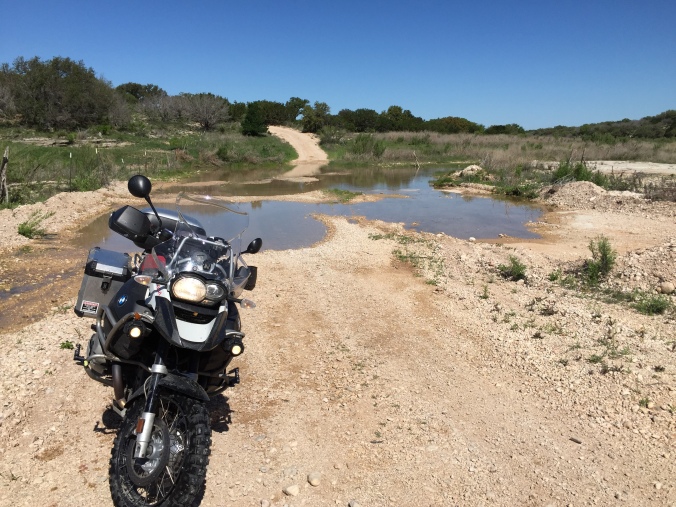 So East Mill Rd turns into Salt Branch Road, according to the book. It’s actually Salt Branch Loop so says the mighty GPS and I don’t know if it’s the GPS’s fault or Earl reading the wrong page in the book, but we ended up taking the road that leads to the largest, most difficult water crossing for dual sport riders in all of Texas.

Well, maybe not all of Texas, but the Hill Country for sure.

But before I get to that…

We were riding along on East Mill Road. 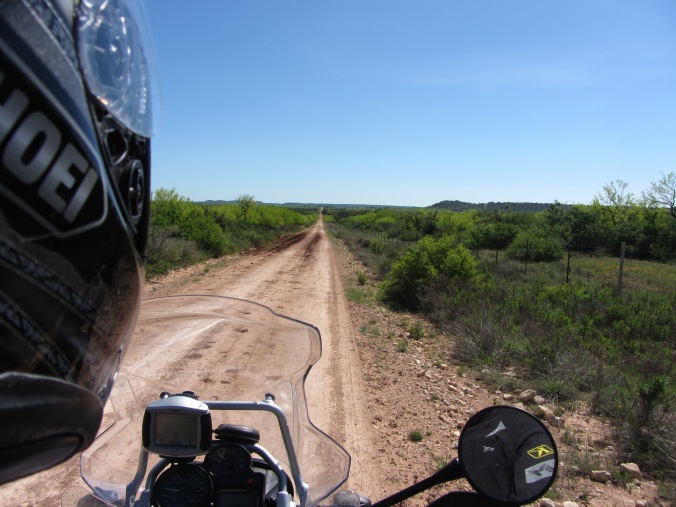 We came to a road that we made a left on when we should have just kept going.

So we’re riding along this road, enjoying the countryside. 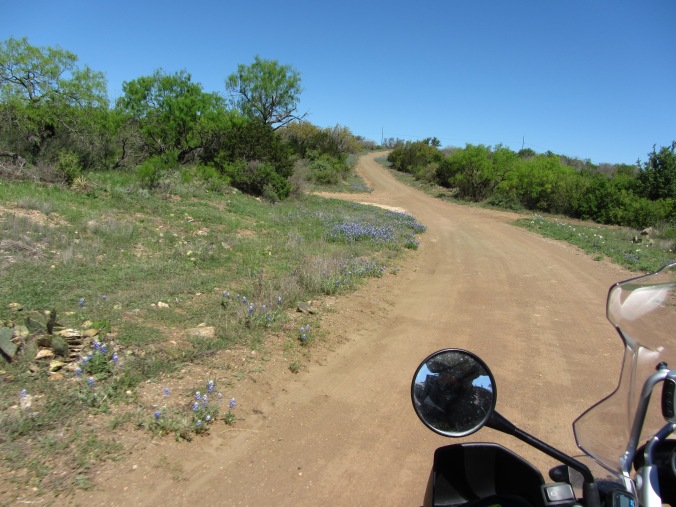 And then we come to our second water crossing of the day. 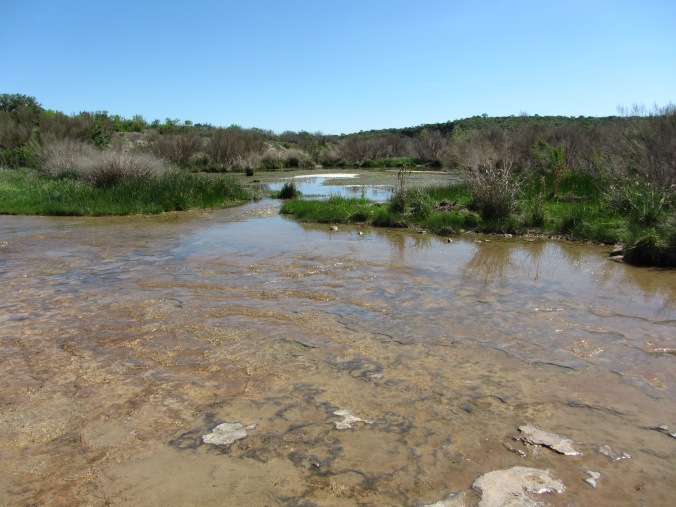 This one was rock, not dirt and it was slippery. Very slippery, but we made it across.

Just past this water crossing I saw a sign that said Eckert James River Bat Cave Preserve and while I was pondering what a bat cave preserve was, an alarm went off in my brain.

And around the bend, my suspicion was confirmed.

My first thought was Earl came this way intentionally to scare the crap out of me.

Allow me to mention a billy-goat road in North Carolina where you can hear my not-too-happy voice sprouting profanity on the GoPro video that still makes Earl chuckle to this day.

But that’s not what happened. Innocent mistake, but now what to do?

Crossing was way too risky since we were out there alone, and everything we had with us was loaded onto the bike since we were between motels so the smart thing to do was turn around.

And that’s exactly what we did.

I could have sworn we took a picture of the James River Crossing, but I’ll be damned if I can find it.

So here’s a picture of Earl crossing this one again. 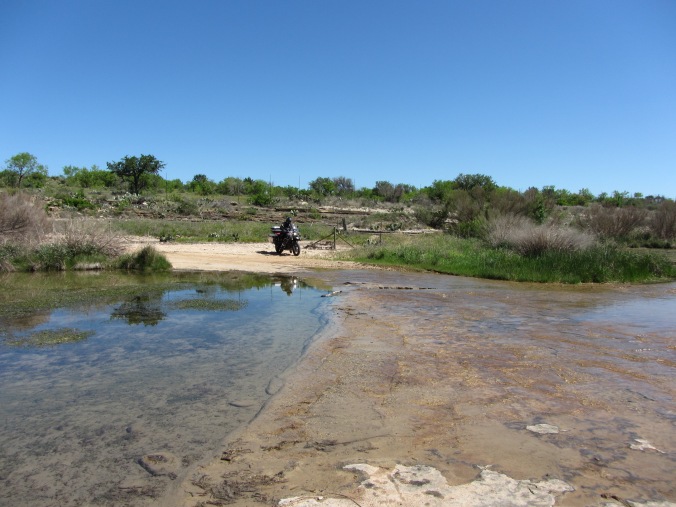 And if it looks slippery driving across, try walking across it. I came very close to busting my ass making my way to the other side to video Earl crossing.

So we got back to the road we were suppose to be on and made our way to Onion Creek Rd.

From there we went south on Hwy 783 to Threadgill Creek Rd.

Now I would be leaving out a major detail of the Hill Country in April if I didn’t mention the Blue Bonnets. 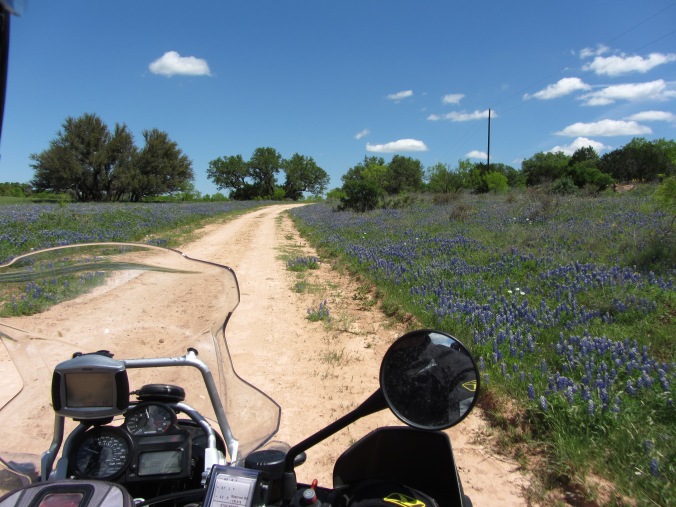 Lots and lots of Blue Bonnets… 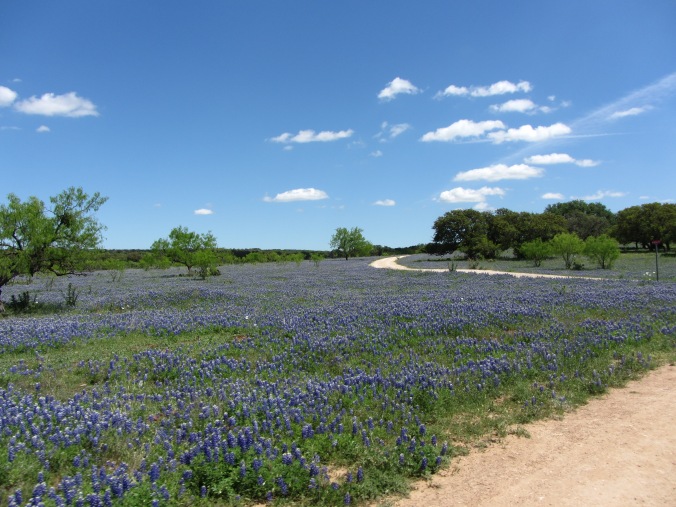 And this photogenic gal… 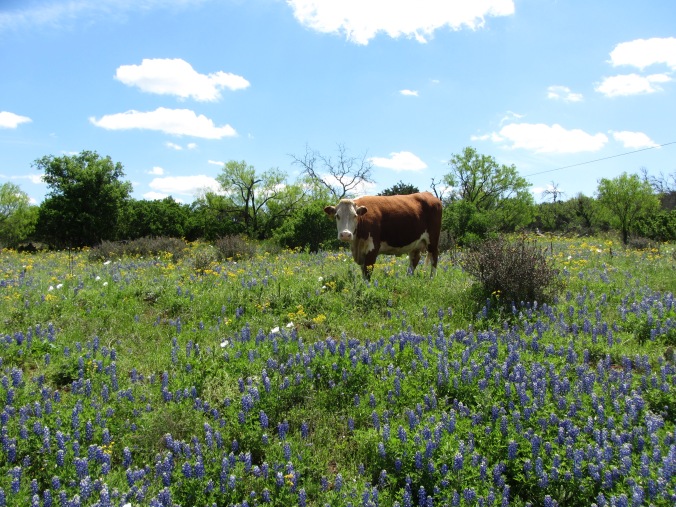 Awaiting her close-up amongst the Blue Bonnets… 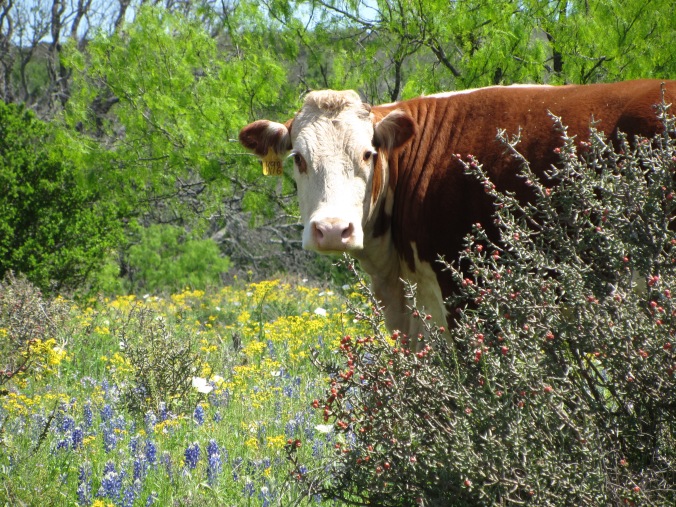 From there, it was time to make our way towards Llano and lunch. We hopped on Hwy 2323 north. 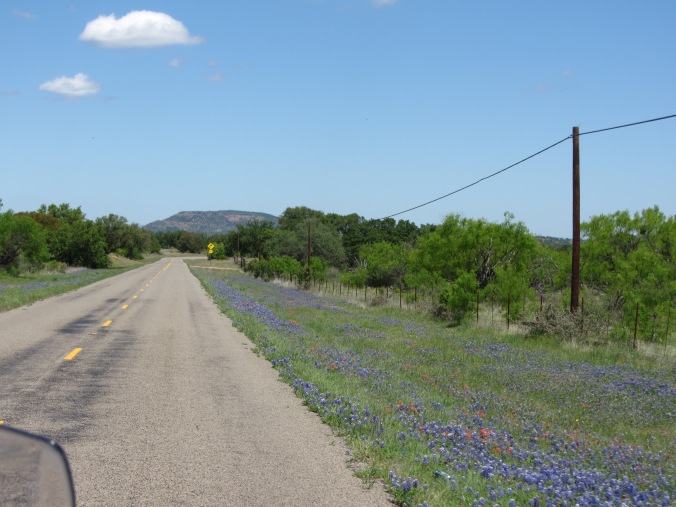 I could see Enchanted Rock in the distance on our way to Llano. We didn’t get to stop to hike it this trip, but that’s just one more excuse to take a bike trip out that way again, not to mention the BBQ. 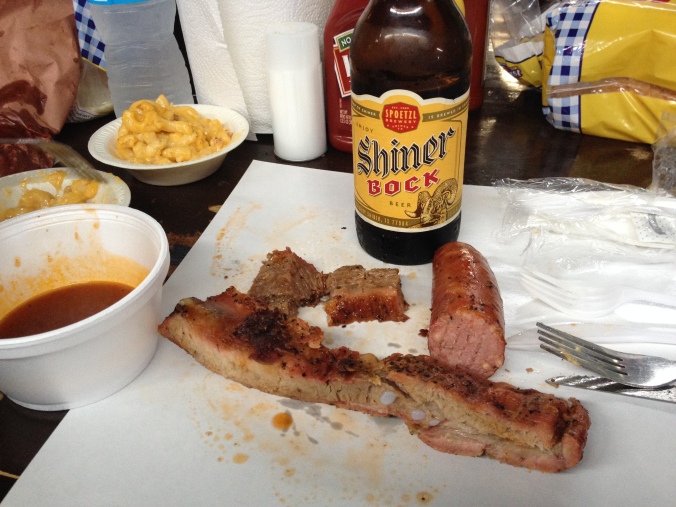